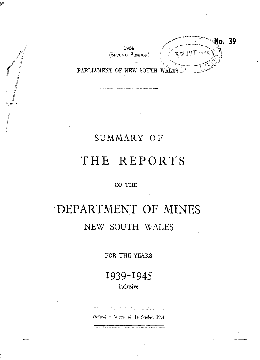 “The continual drop in gold production after 1940 was due to the effect of the War. From 1942, restrictions on gold mining still further caused a drop in production. Many mines ceased operations, and only those larger operators producing metals vital to the war effort, in association with gold were able to contribute appreciably to the annual gold production of the State.

Of the total production of gold recorded during the years 1939-1945 inclusive, 71,418 oz. of gold were won by dredges mainly from the Wellington and Gulgong districts.

The most notable production for the period was that from the Cobar field, where 295,961 oz. of gold were produced, mainly by the three mines under the control of New Occidental Gold Mines N.L. . With the exceptions mentioned above, the bulk of the gold produced was won by a large number of small mines, sluicing plants, tailings, retreatment plants, prospectors and fossickers.

GOLD SUMMARY FROM THE REPORT

“Adelong Division. Total production amounted to 1,258 oz valued at approximately £11,505 during the period. The Gibraltar Gold Mine continued production from 1939 to 1943. The Golden Valley dredge was moved to a new site during 1939, when 463 oz. of gold were produced. In 1940 the dredge had to work in poor ground with very low production. In 1941, 35,000 cu. yd. of material were treated for a recovery of 1:-56 oz. gold. Operations ceased in 1942 owing to the difficulty of obtaining labour and supplies on account of the war.

GOLD SUMMARY FROM THE REPORT

The following notes are compiled chiefly from reports furnished by Inspectors of Mines, Wardens and Mining Registrars.

They cover the activities in the various Mining Divisions for the period 1919-1945 inclusive. Further information is contained in reports by the District Inspectors, which are available for perusal in the Department.

-Total gold production for the Division amounted to 77 oz., valued at approximately £740, won mainly by fossiekers from alluvial sources. No production c was recOl’ded after 1912.

-Total production for the period 1939-45 inclusive amounted to 2,919 oz. valued at approximately £24,912. Details of annual production are as follows:- 1939.-Wann and BOWll produced 40 tons of ore yielding 129 oz. gold. Young and Easterbrook treated 43 tons of ore for a return of 95 oz. gold. C. Collins won 29 oz. gOld, 8 tons are from a small mine at Lunatic. 1940.-R. McRae produced 217 oz. of gold. Young and Easterbrook sent 2n tons sulphide ore to Port Kembla from which 62 oz. gold were reeo,ered. Shackleton Gold Mines Pty. Ltd. installed a crushing and cyanide plant valued at £8,000, at Sawpit Gully. 534 tons of tailings cyanided, yielded 40 oz. gold. E. H. Young, M t. Carrington, crushed 52 tons of ore and recovered 26 oz. gold. Red Rock Mining Co. Pty. Ltd., working the Beardman Reef at Red Roel” treated 20 tons of ore for 12 oz. gold and cyanided 203 tons of tailings for a yield of 23 oz. gold. 1941.-R. McRae treated 6 tons of ore for a yield of 50! oz. gold, at his mine at Lunatic. Wann and Bown, working under tribute agreement to Shackleton Gold Mines, crushed 147 tons of stone and recovered 26 oz. of gold. C. Collins obtained 16 oz. gold from 12 tons mined at Lunatic. The shaft is 70 feet deep with a drive 180 feet long at that level. 1942.-Walm and Bown, under tribute agreement with Shackleton Gold Mines Pty. Ltd., crushed 24 tons of are and recovered 3 oz. gold. E. H. Young crushed 12 tons of ore for a yield of 6~ oz. gold. J. Chisholm operated a cyanide plant at Drake, treated 2,294 tons of tailings from various localities, and recovered 269 oz. gold between 1939 and 1943. The remaillder of the production from the Dl’nkc Dhision is attributable to fossickers, prospeetol’s and omall cyanide plants.